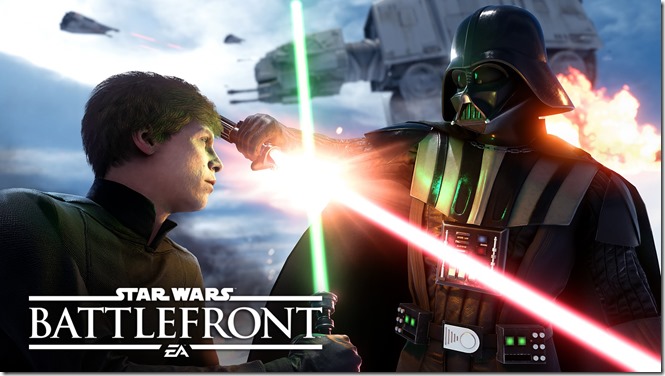 So with all the hype for the latest Star Wars Battlefront game, another trailer was released at the Paris Gaming Week. This is the games launch trailer, and if launch tailers is what gets you amped for games, then head down below and see this one. The graphics of this game is absolutely amazing!

If you played the Star Wars beta that was available in the first weekend of October, you will notice in this trailer that there are more alien races that you can play, like the Duros and Twi’leks. You will also see Boba Fett and Princess Leia go head to head, a bit of excite when Boba Fett almost fell into the Sarlacc Pit and escapes with a sneaky comment. Seems like the Sarlacc Pit seems like a nice way of force pushing your enemies into that ugly thing.

Later on you will see Darth Vader coming in throwing his saber around acting all badass, then a sudden appearance from Han Solo. Somehow I believe he won’t win the fight against Darth Vader, but we won’t really know until we give it a go ourselves. This trailer for me is one of the better trailers released. So my hopes are high that this game will be a great success, unlike Battlefield Hardline which seemingly didn’t take off so well with the gamers. This game does look like it can be played in compititions which will something we will be looking forward to.

Star Wars Battlefront will be launched on PlayStation 4, PC and Xbox One on the 17th November.

See you guys on the battlefield.